Your Biggest Mistake is a Failure to Act

I found a quote the other day from Teddy Roosevelt, one of the most successful progressive U.S. Presidents.  It gave me some thoughts on how I’ve learned to adjust my working habits in the past year or so. 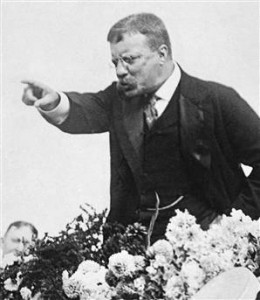 Teddy got his hands dirty in all sorts of social public and political doings – he passed laws like the Meat Inspection Act and Pure Food and Drug act, a precursor to the FDA which enhanced the standards for foods and prevented the intentional mislabeling.  He hated the large corporate influence over government and their power over markets.  He got involved in the United Mine Workers strike.  He prevented the mining, drilling, and lumber cutting in what are now America’s most valuable natural heirlooms.  And probably his greatest achievement for the United Sates – and the world – was the Panama Canal.

Now regardless if you believe T.R. was a good President either politically or philosophically, there’s something about T.R. that made him a unique, strong leader and President.  It’s this quality we can all admire, and this quote embodies T.R.’s style:

“…the man who really counts in the world is the doer, not the mere critic – the man who actually does the work, even if roughly and imperfectly, not the man who only talks or writes about how it ought to be done.” – Teddy Roosevelt

It’s really the same in any business endeavor, including online marketing.  There’s no such thing as 100%.  Perfection does not exist, and the perfectionist will never succeed.  So if you’ve been working on a Web project for months and haven’t put anything online yet, it’s about time you do so.  If you’ve had ideas you haven’t started, start them now.

The most interesting thing to me is how much you learn when you get started this way.  It truly changes the entire dynamic of how you work.  It doesn’t matter how confident you are about you work, if you hesitate for others to see it, you’ll never know if others like it or not.  You’ll never know what works and what doesn’t.  Likewise the progressive worker will know almost instantly what Web content people read, what products they are purchasing or interested in, etc.

When the Perfectionist says:  “Nobody should see it until it’s done.”
The Progressive says: “I’ll post this now and update it later.”

When the perfectionist says:  “Wait, I’m not done yet.”
The Progressive says: “I’m just getting started.”

When the Perfectionist says:  “It won’t make sense until it’s completed.”
The Progressive says: “Bear with me, it’s a work in progress.”

When the Perfectionist says: “OMG!!! SOMETHING IS BROKEN!! FIX IT FIRST OR THE WORLD WILL FALL APART!!!”
The Progressive says: “This is going into my next update.”

When the Perfectionist says: “I can’t complete this without [insert random project detail]”.
The Progressive says:  “I’ll get to those details as soon as I can.”

When the Perfectionist says: “It’s perfect.”
The Progressive says: “Nothing is ever perfect.”

When the Perfectionist says: “I’m disappointed because my Perfect Project failed.”
The Progressive says: “Look at all that time you wasted trying to achieve perfection.”

A progressive realizes perfection isn’t possible.  The Perfectionist will may be the most proficient and productive person on the planet, but they will almost always certainly fail, or perceive failure, in most things they do.

It’s the perpetual refining that puts you closer to perfection, gives you valuable experience, and puts you in touch more with what your users want.  So instead of sitting on your projects, waiting for yourself to feel comfortable about them, let you audience decide as fast as possible how they feel about them.  You can always go back and change it later.